Virut is a botnet malware family which has initially been observed 13 years ago, in 2006. Traditionally, it spreads as a file-infecting virus, and has monetized pay-per-install schemes and information theft. Although believed to be dead by many following a major sinkholing operation conducted by NASK/CERT Polska in 2013, events over the last few months indicate an uptick in activity. Earlier in 2018, an unusual drive-by attack with a Chinese nexus involved dropping a Virut sample. Having dealt with takedowns before and tracking botnets, this piqued my interest.

Further research shows that although the sinkholing from 2013 for C2 domains ending in .pl, .at, and .ru is still in place, some variants manage to evade and actively distribute additional malware as of November 2018. Interestingly, the C2 protocol has not changed. A recent Virut binary has the SHA-256 hash 054eeaa9f120f3613cf06ad010c58adf025c4f8c03dcc6da6acd567be27e87aa and was first submitted to VirusTotal in November 2018. On 32-bit Windows, it injects code into the winlogon.exe process. To connect to the C2 server, it uses the domain tbsgay[.]com which at the time of analysis resolved to the IP address 148.251.79[.]206. The full set of hardcoded C2 domains in this sample is:

The first %u is a counter where the values 1 and 2 were observed. Note that the initial download URL that Virut distributed follows the same pattern except for the counter value being 0.

The second %u is a value from a reserved area named e_res2 in the DOS header (offset 0x3a), preceding the e_lfanew field. The value is read from memory using

and was observed to be 31 exclusively. Typically, e_res2 is set to all zeroes in regular PE files as it is not used. In other words, a nonzero value is uncommon. The purpose of retrieving this value is unclear but it could be an attempt by the operator to ensure that further samples are only downloaded by previously distributed samples. However, even with the second parameter set to 0, the payload is served.

These files are associated with malicious activities described by Fortinet, based on a common user agent string Medunja Solodunnja 6.0.0 that is used in subsequent C2 communication with the host static.76.102.69.159.clients.your-server[.]de (resolving to 159.69.102[.]76).

The Fortinet researchers suspect a Ukrainian nexus of the payload files based on a cookie maker in Lviv, Ukraine, with the same name as the user agent, and domain registration data. It is unclear if the payload is operated by the same entity as the Virut activity, though. In 2013, Brian Krebs mentioned research by Team Furry which suggests a possible Polish nexus of the Virut operators.

Before the sinkholing in 2013, Virut has often ranked in the malware family top-ten which by itself justified regular scrutiny. With the sinkholing in place, it may have disappeared from people’s radar. How and when did Virut come to life again?

A bit of Virut history

Probably one of the first technical descriptions on Virut was published by Joe Stewart in 2009, motivated by a shift from a plaintext C2 protocol to encrypted C2. His report details an interesting trick on the encryption in Virut C2 communication: Since the 4-byte session key is pseudorandomly chosen by each bot, and never transmitted to the C2 server, the server is left with a known plaintext cryptanalysis attack to reveal it. Given the underlying IRC-like protocol with the string NICK at the start of the first message, a known plaintext attack reveals the key. Once recovered, the session key is used to decrypt the remainder of the request as well as to encrypt the responses towards the bot. 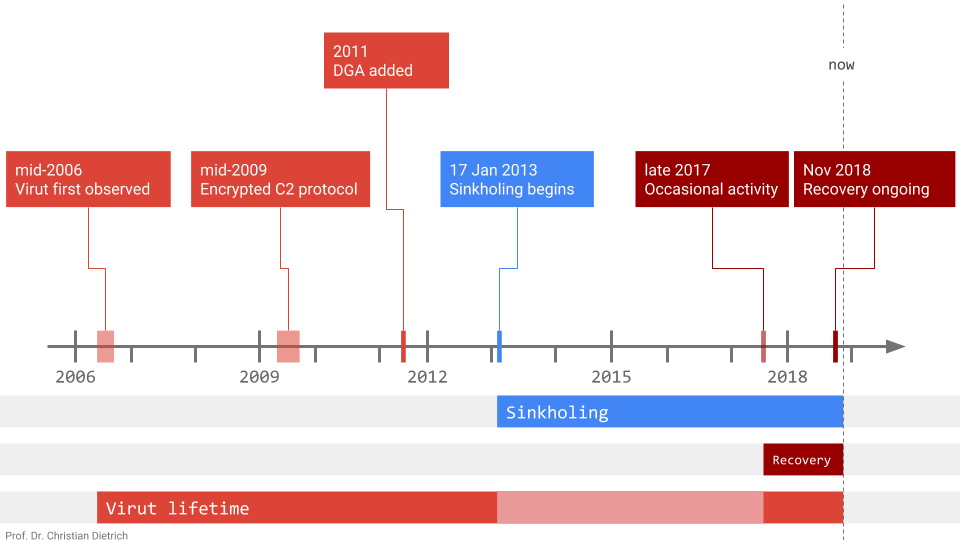 To increase resilience and impede sinkholing, Virut contains a date-seeded domain generation algorithm (DGA) that generates up to 10,000 domains per day of the form [a-z]{6}.com. Daniel Plohmann and others documented that Virut’s DGA is particularly prone to domain collisions, due to the small length and the high number of generated domains. The recent sample still contains the DGA. However, it seems that they were not needed to establish C2 comms as the hardcoded domains were resolvable.

To prevent from hijacking the C2 channel, an RSA signature verification step was introduced. A valid Virut C2 server must provide a signed SHA-256 hash of the C2 domain. The signed hash is verified by the bot before accepting commands. This step is vulnerable to a replay attack and was most likely intended to gracefully handle accidental collisions between a DGA-generated domain and a completely unrelated domain. Nicolas Falliere documented this in August 2011. The same 2048-bit RSA modulus is still used in the current sample:

Recovering after a multi-year slow-down seems to be an attractive option for botnet operators. Malware researchers who tracked such a botnet in the past may have shifted focus or even moved on to other topics. In addition, an uptick in activity may go unnoticed with sinkholing in place, unless carefully inspected.

No question, sinkholing botnets is tough, and there are many parties doing a great job to achieve it. Sustaining a sinkholing effort is even harder, especially if not paralleled by law enforcement action. Although sinkholing incurs additional cost on the adversary, a patient operator may withstand sinkholing. In the end, sinkholing a botnet of certain impact is certainly useful and necessary. It seems in addition to identifying and countering new threats, the anti-malware community may also need to monitor contained threats on a long-term basis.

The following is a summary of the indicators mentioned above.

A related sample execution can be found here. 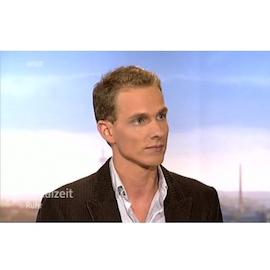